“I want to be exceptional,” 14-year old Tammy said about her goals in life.
“I don’t want to be a strawberry. I want to be a durian,” said 13-year old Gil, after he learnt the meaning of the phrase “strawberry generation”.

Tammy did not let the challenges she faces in communication and social interaction stop her from believing in herself. She plans to be a researcher in the future.

Gil hasn’t decided on his career path yet but he prefers the sciences and does not intend to let the challenges he faces in learning stop him from showing grit.

Role Models in Science and Mathematics

For children like Tammy and Gil, learning that there are famous individuals who had conquered their own disabilities and had blazed a trail in the scientific fields for others to follow can be a motivating experience. They should know that they can do what they might have been told can’t be done, and how others have done it.

This is why we have put together a series focusing on inspiring role models in science and mathematics. Today, we are putting our spotlight on Charles Proteus Steinmetz, the coolest scientist and mathematician ever.

Last week, we looked at Leonhard Euler, one of the greatest mathematicians in history but whom many people have never heard of. Today’s role model is someone like Euler. Charles Proteus Steinmetz is not well-known despite his crazy long list of accomplishments.

Before we go into the boring bio, let’s first take a look at some of the bad ass aspects of Steinmetz.

There is an anecdotal story floating around that many of us might have read/heard:

An owner of a large motor company encountered some problems with a huge new generator. His engineers could not solve the problem so the owner called an expert in. The expert arrived and asked for a notebook, pencil and cot.

The expert listened to the generator and made some calculations. He then climbed up a ladder to put a chalk mark on a side of the generator. He climbed down and told the engineers to remove some parts from the location where he placed the chalk mark. They did so and the generator functioned perfectly after that.

The expert then sent the company an invoice for $10,000 (which was a lot of money back then). The owner didn’t understand why he was being charged for so much money and asked for a breakdown of the bill.

The expert sent the following invoice back:

The owner paid the bill.

The owner in the story was Henry Ford, the founder of Ford Motor Company and the expert was none other than Steinmetz!

(The source of this story is a letter sent to Life magazine in 1965.)

Secondly, some of Steinmetz’s nicknames from his contemporaries are:

The Chief of Chief Engineers

‘Nuff said; his coolness level has just gone through the roof.

(Schenectady is a city in the Schenectady County, New York, United States, where Steinmetz stayed since 1984.)

Steinmetz is the bad-ass-looking man in the centre surrounded by his mob. Now can you guess who was standing to his right? 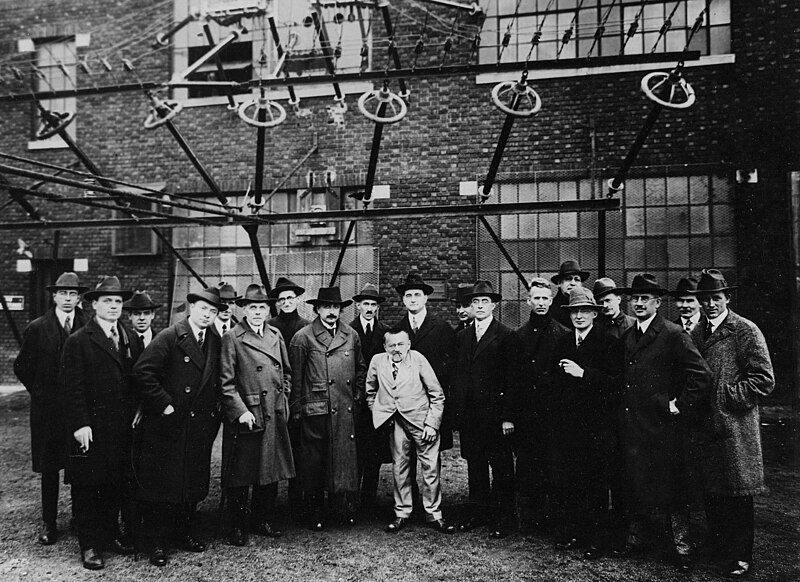 In my past life as an officer worker, I always felt that officials who take an inordinate number of photos of visiting dignitaries are just tiresome but this photo proves that their efforts will be worth it. 100 years from now, the value of their endless uploads to social media platforms will pay off (probably).

But who is he really?!

Steinmetz was born as Carl August Rudolph Steinmetz in 1865, more than a century after Euler. Like his father and grandfather, he suffered from dwarfism, hunch back and hip dysplasia (an abnormality of the hip joint). He was working on his doctorate when German police started an investigation on his socialist activities. He fled to Zurich in 1988 to escape possible arrest and emigrated to the United States in 1889.

He was nearly turned away by immigration officers because he was a dwarf, but a friend who was with him assured the officials that Steinmetz was a genius who would benefit America. After his arrival, Steinmetz decided to change his name to sound more American. He also changed his middle name to Proteus. Proteus is a wise old sea-god from Odyssey and a nickname that his professors gave him back in Germany.

Steinmetz was a chair of electrical engineering at Union College, the president of American Institute of Electrical Engineers (AIEE) and a vice president of the Internal Association of Municipal Electricians. He held over 200 patents, and wrote 13 books and 60 articles.

What are Steinmetz’s achievements?

Here is his list on Wiki’s page. I mean … most people would probably die happy with just one mention …

Steinmetz was an expert on alternating current (AC) systems theory.

Steinmetz’s work on magnetic hysteresis resulted in the development of transformers which are used for transmitting electrical power in many devices. His work in this area brought him worldwide professional recognition and the reputation of being an engineering wizard.

Before Steinmetz, engineers carried out AC circuit theory and analysis with complicated and time-consuming calculus-based methods. Steinmetz simplified the complicated methods and his groundbreaking work here “taught a whole generation of engineers how to deal with AC phenomena).

Steinmetz’s advanced the understanding of lightning and resulted in the first man-made lightning. This earned him the nickname “Forger of Thunderbolts” and “Modern Jove”.

Master of his own destiny

Despite the fact that he was four feet tall, he had a hump on his back, his body was unproportionate and his abnormally curved spine would have caused him pain and other complications, Steinmetz never allowed his condition to stop him from living to the fullest.

He hiked, canoed, and experimented with photography with fellow engineers. He collected rare plants and kept alligators, rattlesnakes and black widow spiders.

However, it would be wrong to say that he was unaffected by his appearance. Although he loved children and family life, he decided to never marry because he was fearful of passing on his conditions.

Even so, he did not passively accept his fate. Instead, he proactively applied his brilliant mind and came up with an unusual arrangement.

Steinmetz was close friends with one of his lab assistants, Joseph LeRoy Hayden. When Hayden announced that he would be getting married and moving to an apartment nearby, Steinmetz had an idea. Steinmetz lived alone in a large house that had a green house, research lab and office. He asked Hayden and his wife to move in with him. Hayden was agreeable, but his wife was not so keen. Steinmetz managed to persuade her by assuring her that she could run the house as she liked.

This arrangement gave Steinmetz the family he wanted and he even legally adopted one of Hayden’s three children as his own.

The Hayden children had a grandfather, “Daddy” Steinmetz, who ensured that they grew up in a household filled with wonder. Birthday parties included liquids and gasses exploding in Bunsen burners scattered decoratively around the house. Not much taller than the children who ran about his laboratory and greenhouse, Steinmetz entertained them with stories of dragons and goblins, which he illustrated with fireworks he summoned from various mixtures of sodium and hydrogen in pails of water.

Steinmetz was a true master of his own destiny and exemplified the following quote:

While doing my research, it struck me that Steinmetz must have been a beloved figure in his community.

1. None of his nicknames were derogatory or unkind.

But there wasn’t a single hint of meanness in Steinmetz’s nicknames. These nicknames only show the extent of affection, admiration and regard people had for him.

This is nicknaming done right.

Instead of nasty cyberbullying and name-calling, maybe we can start with kind nicknaming.

2. Honours and awards in his name

Steinmetz was also named for numerous honours and scholarships, even after his death. For example,

What I want to say is, the picture I got is someone who was loved very much, by his friends, colleagues, neighbours and community. They didn’t care about his physical deformities and continued to honour him and kept his memory alive long after he was gone. For example, there has been 75 Charles P. Steinmetz Memorial Lectures since 1929.

I think that part of it must be because of his personality. He didn’t mope or sit around feeling sorry for himself. He went all out to make the best of his condition, made great friends, did volunteer work, reached the peak of his professional career and created great memories with his adopted family.

There is a sweet story about Steinmetz and Thomas Edison that tells us a lot about who Steinmetz was and why people might have liked him so much:

In 1922, Thomas Edison came to visit Steinmetz. By then, Edison was nearly deaf, and Steinmetz tapped out a message on Edison’s knee in Morse Code. Edison beamed, and the two continued their silent conversation in front of bewildered reporters.

Here is the photo of the two legendary scientists sitting together during that visit in 1922, looking at a lightning generator Steinmetz developed.

Again, I feel heartened, because this reinforces the vision that in that world of mathematics and science, people were simply treated as people. I think we can all do with a lot more of that and less differentiation and over-the-top political correctness.

Role Models in Science and Mathematics Series: Leonhard Euler, One of the Greatest in History

How to Nurture the Potential of Children with Special Needs

All In is a Singapore based one-stop platform for caregivers of children with special needs.

© All rights reserved. All In